Dinkum Pies is a bakery near the Block Arcade which sells both pies and pastries. A few weeks ago we decided to make use of a Scoopon (which is currently still available!) to get some cheap Dinkum pies for lunch. Regular pies are normally $5.50, but with this voucher you can get a regular pie and coffee for $4. Instead, the two of us opted to share the “Family Pack” voucher: $13 for 2 regular pies, 2 party pies, 2 mini sausage rolls and 2 hot drinks.

Ani ~ The steak and onion pie had a really tasty meat filling due to the onion. The pastry of the pie was decent, if a little thick in some places. The party pie tasted like an average party pie; plain meat filling. The sausage roll had a really bland, dry chicken mush filling and was a lot less enjoyable than the pies.

Wendy ~ I decided on the “potato pie” which was a typical shepherds pie, with a minced beef filling and mashed potato on top. There were pieces of veggie in the pie but they were very limited, and to me there was no stand-out flavour in the meat. The potato top completed the meat in the pie very well.

The party pie and sausage roll had the same flavour as the ones that can be easily purchased from the frozen food section of the supermarket, which was disappointing

We witnessed the hot chocolates being made with a chocolate syrup, which explained their sugary taste. They weren’t particularly bad hot chocolates as far as cheap cafes go, but we’d probably give them a miss next time.

Verdict: Regular pies – these pies had a decent taste for the price, and we would buy them again for a quick and cheap lunch. Party pies – average. Hot chocolates – average. Sausage rolls – would not eat again. 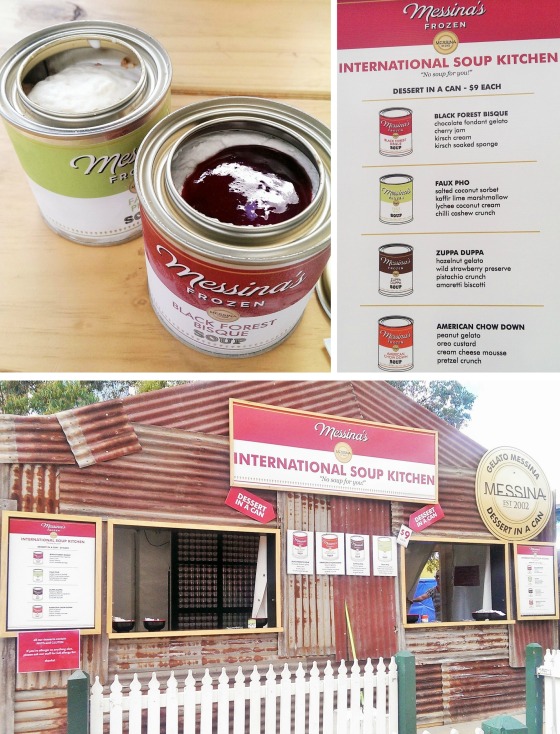 From the 16th Jan – 1st Feb the Royal Croquet Club festival took place, and this included a Messina International Soup Kitchen stall with a selection of four limited edition gelato flavours. For $9 you could get Messina gelato in a cute little “soup” can. The flavours included chocolatey “Black Forest Bisque, hazelnut “Zuppa Duppa”, coconut “Faux Pho” and peanut “American Chow Down.” 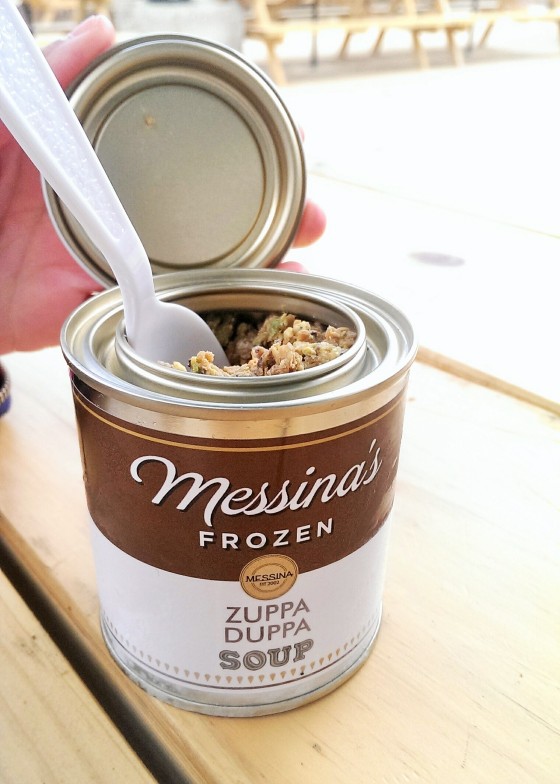 Wendy ~ I had a chance to try both the Zuppa Duppa and the Faux Pho, and my preference would definitely have to be the Zuppa Duppa. The combination of hazelnut and pistachio worked so well!  The hazelnut gelato tasted chocolatey but was much was less heavy than plain chocolate gelato, and the crunchy texture of the pistachio made the gelato more exciting. Once I reached the bottom of the can I was surprised by the slight saltiness of the biscotti.

The Faux Pho had a more light and refreshing taste than the Zuppa Duppa. The salted coconut flavour was not something I’d had before before, but it tasted good and went well with the fruity elements.

Ani ~ This Black Forest Bisque had the right balance between chocolate, cherry and kirsch cream, so it captured the “black forest” flavour really well. While I really enjoyed the flavours, I struggled with the richness of the dark chocolate fondant gelato and in hindsight I think it would been better if I’d ordered this can to share, rather than attempting to eat it all myself.

Verdict: Messina is always a great choice for a gelato fix. We think think they should keep selling these special edition flavours, even though the RCC has ended. Also, we thought that the soup can idea was very cute – Wendy was very happy to take the cans home with her as mementos of the dessert. :3

Wendy and Ani are two friends who enjoy exploring Melbourne's eateries. For about a year while they were still university students, they documented their food experiences in a blog, 'Addicted to the Sweet Life'.